Body and Aerodynamics
The general shape of the car will stay the same, but in order to fit the 18×12 wheels with the wider track width in the rear, I will extend the quarter panels out to make a widebody. Similar modifications will be done to the front fenders to fit the 18×10 wheels, but not as extreme as in the rear. The front of the car will have a sheetmetal air dam and splitter to create a high pressure zone for the intercooler, oil cooler, and radiator, as well as to speed up the air flowing underneath the car. The car will have a flat bottom by using aluminum sheetmetal panels, as well as an aluminum rear diffuser.  In 2009 I made a 1/10th scale model Volvo 240 as one of my final projects for my bachelor’s degree, and conducted wind tunnel testing on the model. 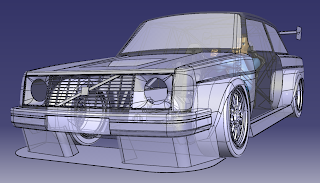 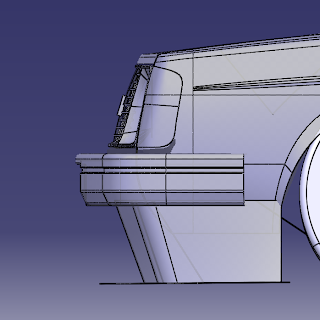 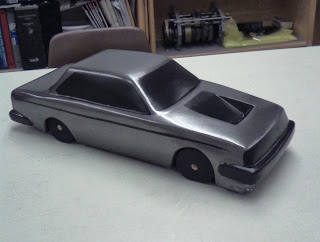 From the wind tunnel testing I learned that the body creates lift, and lots of it. To counteract this, a large rear wing will be mounted high up on the trunk lid, but I have not purchased this part yet. I am planning to use a Nascar Car of Tomorrow wing if I can find one available somewhere. Check out the video below for awesome wind tunnel spool-up noises and brick-like aerodynamics:

Lots of other work has been done to the car over the years that I am either forgetting about or leaving out of this post. I’ve covered the big parts of the project, and future posts from here on out will be more detailed and technical.

Finally, though not complete, here is a concept of what the car should look like. The color I have chosen to finish the car in is Toyota 1A1 “Anthracite Metallic”. 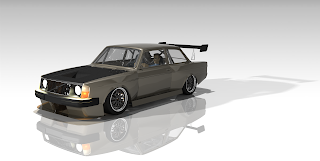 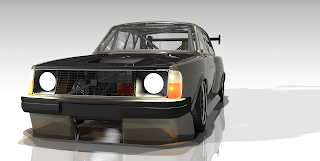 The Delay
I graduated from WWU in 2009 with a degree in Industrial Technology with a specialization in Vehicle Design. From then until the end of 2012 I worked full time as an IT consultant and really not much got done on the car. I was making decent money, so I bought some more parts here and there, but really not a whole lot got done. I also had other projects to distract me, like my 740 Turbo I already mentioned, my 1983 Volvo 245 DL, and my newly acquired 2006 Mitsubishi Lancer Evolution.

In September of 2012 I moved from Seattle all the way over to Göteborg, Sweden to continue my education at Chalmers University of Technology by getting my master’s degree in Automotive Engineering. I was only able to visit the US and work on the car for one month in 2013, as I was part of the Chalmers Formula Student team (on which I designed vehicle dynamics and suspension components) competing in the UK and Germany. 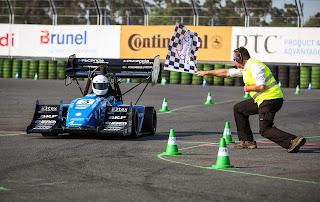 Right now since I cannot work on the car directly, I am working towards having a fully developed CAD model of the project. Many of the parts for the car have already been modeled, but the major task is getting everything into the whole car assembly.

I am currently conducting my master’s thesis research at Volvo Cars Corporation on vehicle dynamics and simulations. After I finish in June of 2014 I will get some real work done on the 242!

One thought on “The Beginning (continued even more…)”